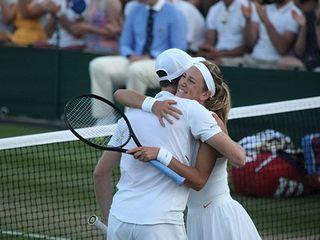 Victoria Azarenka and Jamie Murray qualified for RO16 of the Wimbledon tournament. In the second round match, the Belarusian-British tandem defeated the German Anna-Lena Grönefeld and the Colombian Robert Farah, seeded 7th. The players spent about three hours on the court. In the decisive set Azarenka and Murray managed to come back from 1-5. The result is 7-6, 6-7, 7-5. The next rivals of Belarusian-British duo are Matwe Middelkoop (the Netherlands) and Johanna Larsson (Sweden) seeded 12th. The match will be held on Wednesday.