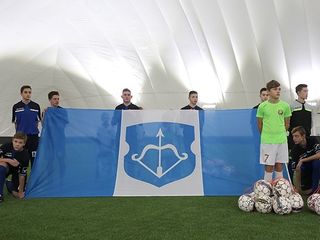 An indoor football arena has appeared in Brest city. The covered 65x110 meters football pitch is laid with the new-generation artificial grass. The sports facility is a gift to the city’s thousandth anniversary, Brest will celebrate next year. The construction was financed by the city budget and the Football Federation. Now Brest residents will be able to play football all year round. The stadium meets all the standards for international matches. The opening of the arena featured a match of veterans of the FC «Dinamo-Brest» vs the team of the Belarusian Football Federation.