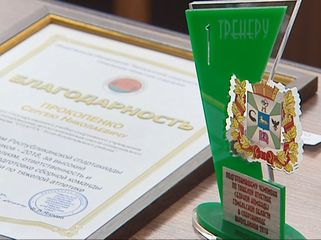 Coaches of students who became prizewinners of the Republican School Olympics have been awarded in Gomel. 46 coaches received award statuettes, gifts and letters of thanks. This year, young athletes from the Gomel region showed the best results. The team of the southern region beat other regions having scored 965 points. Gomel representatives were the best both in summer and winter sports with four gold, seven silver and eleven bronze medals.