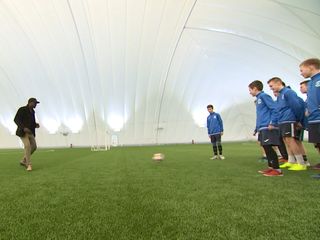 Famous football player Emile Heskey visited Brest. Over his career, the athlete played for six football clubs, including Lester city and Liverpool. He was a part of Team England at world and European championships. Now, Mr.Heskey is engaged in selection of talented youth in different countries. The former forward attended a practice at the Football academy, founded by the club «Dinamo-Brest». Almost 130 children are trained there now.