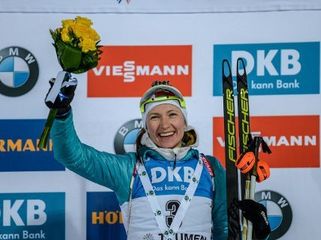 Belarusian biathlete Daria Domracheva triumphantly finished the season. The day before, at the last stage of the World Cup in Tyumen, the four-time Olympic champion won the mass start. The athlete showed excellent speed on the track. In the shooting she made only one mistake on the third range. At the final shooting she was fifth, but with a kilometer left to the finish line she made it to the leaders' pack and came in first. Daria Domracheva was congratulated by the President of Belarus. This is the tenth victory of Daria Domracheva in the mass start and 34th in the career. The Belarusian now has equal number of victories with the legendary German Magdalene Neuner. The big crystal globe was won by Kaisa Mäkäräinen. Daria was only 18 points away from the trophy.