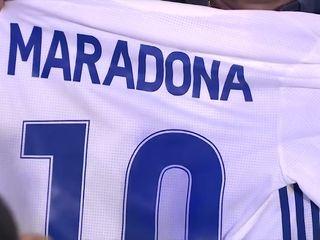 The 20-th century best football player according to the FIFA version came to Belarus. The plane with Diego Maradona on board landed in the airport of the regional center Brest. After the Football World cup, Mr.Maradona is assuming the post of the chair of the board of the FC «Dinamo-Brest», a three-year contract. The legendary Argentinian soccer player will be engaged in the issues of the club's strategic development, as well as interact with all of its structural subdivisions, including the Dinamo-Brest children's academy. The program of the prominent footballer's first day in Belarus includes attending a match between the Belarusian teams the Dinamo-Brest and the Shahter of Soligorsk.