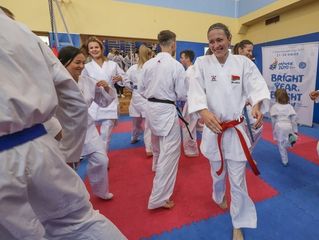 Less than 270 days remain before the launch of the 2nd European Games. Karate fighters will compete for 12 sets of awards during the Games in Minsk. Some of Belarusian star athletes had a chance to try their hand at this martial art. Thus, four-time Olympic champion biathlete Daria Domracheva took a training session at the University of Physical Education with seven time national champion Andrei Grinevich. The competitions in karate during the 2nd European Games will be held at the Chizhovka Arena. This sport is also included into the program of the Tokyo Olympics.