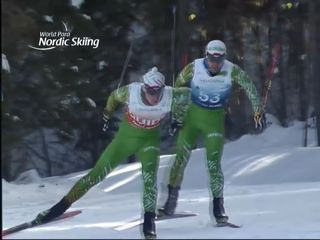 The Belarusians won the biathlon race at the World Cup in cross-country skiing and biathlon among the Paralympians. The World Forum is hosted by the Canadian Prince George. On the first day of the competition, Yuri Golub and his guide Dmitry Budilovich won the biathlon race with four firing lines, and today they have risen to the highest step of the podium in cross-country skiing. The World Cup will last until February 24.