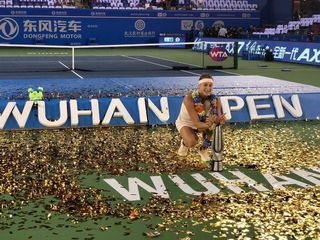 Arina Sobolenko occupied the 16-th place in the ratings of the Women's Tennis Association. Her victory at the Wuhan tournament brought the Belarusian 4 positions up. At the finals, Sobolenko defeated Anett Kontaveit of Estonia 6:3, 6:3. This is the second title in Sobolenko's career. Along with the rise in the ratings, she earned a half a million dollars.