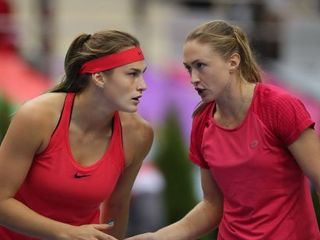 Two Belarusian tennis players can be awarded honorary titles for the year. Belarus' Aryna Sabalenka and Aliaksandra Sasnovich have been nominated for the WTA Awards 2018. Belarus number 1 has a chance to win Newcomer of the Year Award. Aliaksandra has a chance to become Most Improved Player of the Year. International tennis media are voting, and only one athlete in each category can be chosen. The winners will be announced at the final tournament in Singapore on 19 October. Today Aryna Sabalenka started the tournament in the Chinese Tianjin. In the first round, she scored a victory over US Sofia Kenin.