Belarus and Russia to strengthen their cooperation in international affairs 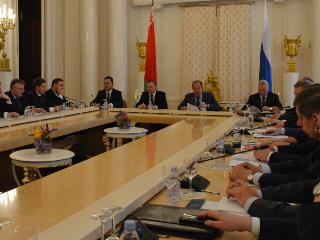 Belarus and Russia have the same views on virtually all international issues. This was stated today by Foreign Minister of Belarus Vladimir Makey at the meeting with the head of the Russian Foreign Ministry Sergei Lavrov. Following the meeting of the board of the two foreign ministries, a resolution was signed, as well as a joint statement on the occasion of the 25th anniversary of the establishment of diplomatic relations between the states. The Foreign Ministers also discussed ways to promote the EAEU in the international arena, coordination of the parties' approaches to the relationship with NATO. The Ministers of Foreign Affairs of Belarus and Russia visited the exhibition timed to the 25th anniversary of the establishment of Belarusian-Russian diplomatic relations.