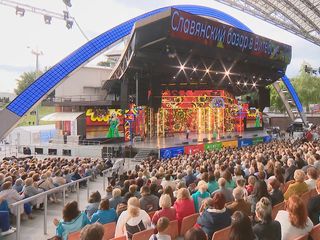 The winner of the international contest of young performers will be announced today at the closing ceremony of the Slavianski Bazaar festival in Vitebsk. The day before the stage of the Summer Amphitheater saw the 16 participants perform international hits. Each number was skillfully supported with the world-famous ballet, "Todes". Representative of Belarus Vanya Zdonyuk opened the second contest day. The confident performance earned him 88 points. His final result is 170 out of 180 points possible. The top five included Kazakhstan, Russia, Belarus, Georgia and Israel. Today the festival's program also features a gala concert of Italian pop stars, theater meetings, solo concerts.