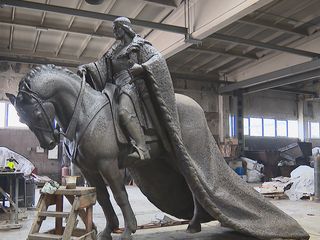 Grand Duke of Lithuania Gediminas is to move to Lida. A six-meter-high bronze equestrian monument to the founder of the city weighs three tons. Now it’s undergoing the final toning phase. The very figure of the legendary politician on horseback has a peculiarity. This is his cloak that will become an important support point of the monument on the pedestal. Officially, the monument will be unveiled at the anniversary of city marked on September 7.