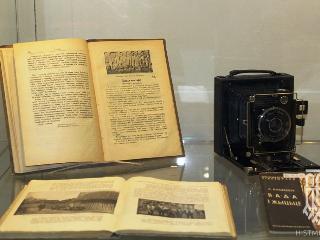 The National Historical Museum of Belarus has opened an exhibition timed to the 135th birthday anniversary of the photo artist Lev Dashkevich and the classic of the Belarusian literature, poet Yanka Kupala. Part of the exhibition is devoted to the friendship and collaborative work of the two outstanding personalities. This is a joint project of the National Historical Museum, the Yanka Kupala Museum, and the National Library of Belarus. The exhibition showcases rare photographs. A grandson of the Belarusian photo-masters Lev Dashkevich Jr. has arrived from Moscow to take part in the opening ceremony and present a family photo camera to the historical museum.