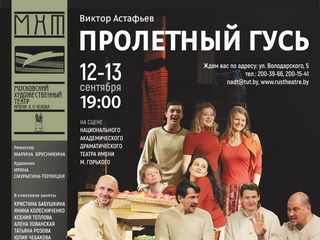 The Moscow Art Theater named after Chekhov is in Belarus on tour. One of the best theaters in Russia brought to Minsk the «Passing Goose». At the heart of the production is not a play. It consists of two prose stories by Viktor Astafiev. The production has been on the theater's playbill for 16 years has garnered numerous awards, including the Russian State Prize. The production was brought to Minsk in exactly the same form as it can be seen in Moscow. It features live music in the form of folk songs performed by the artists themselves.