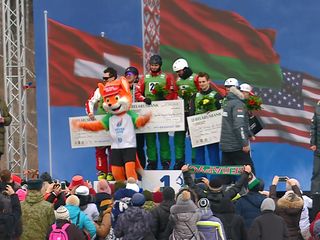 The European Biathlon Championship ended in Raubichi. The last day of the competition brought the Belarusians a silver medal. Irina Krivko ranked second in the pursuit race. This is the third award of our team in the home tournament. Sergey Bocharnikov almost reached the pedestal. Due to an unfortunate slip at the last shooting range, he finished fourth. Belarusian freestylers also pleased the fans. For the first time on the slope in Raubichi international competitions in synchronized jumps were held. The competition among men was won by the tandem of Anton Kushnir and Artem Bashlakov. A week later, freestylers will finish the season with the World Cup in China. Biathletes will go to the World Championship in the Swedish Ostersund.