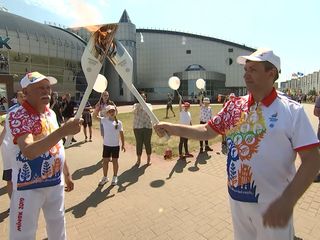 The Flame of Peace has reached Zhlobin. The symbol of the Second European Games was greeted by hundreds of citizens near the Ice Arena. The solemn lighting of the torch on the land of Zhlobin was followed by a concert and flash mobs. From here the torch relay proceeded along the main streets of the city to the industrial giant – the Belarusian Metallurgical Plant. The fire was carried through the shops of the enterprise.