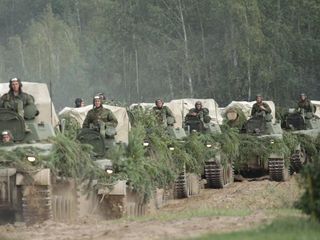 The second stage of the command and staff exercise of the Belarusian Armed Forces is nearing its completion. Under the scenario, the situation has been stabilized and the units will conduct counterattacks in an attempt to take a dominating position, defeat the land troops of the conventional enemy. At this stage, special attention is paid to the management of military operations on the ground. The exercise is taking place at several training facilities with the support of artillery and aviation. Observers from foreign military agencies and representatives of diplomatic corps from 15 countries have the opportunity to follow the course of the exercise.