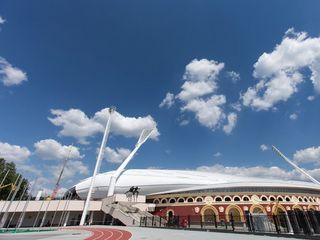 After a major reconstruction exactly a year before the start of the 2nd European Games, its central venue, the Dinamo Stadium, opens in Minsk. After the reconstruction, the Dinamo stadium is actually a new arena. Nevertheless, the architects and builders managed to preserve its historical image. Now the arena can accommodate more than 22,000 spectators. The roof covers up to 80 percent of the seats. Today, students of youth sport schools will be the first to take to the stadium’s race track. President of the International Association of Athletics Federations Sebastian Coe and Belarus’ Olympic champion Yulia Nesterenko will give a start to the relay. After that the spectators will witness an unusual match featuring the country’s best football players.