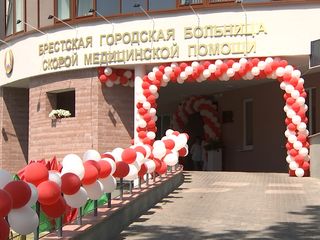 The reconstructed emergency hospital was opened in Brest. The reconstruction of the building was finished two months ahead of time to the Day of the medical worker. The admission unit has become larger, the entrance was moved for more convenience, a separate entrance was built. The magnetic resonance and computed tomographs appeared in the hospital. Previously, patients were taken to other medical institutions for such examinations. Brest region today ranks first in the country in terms of the quality of medical care among other regions. The most complicated operations on neurosurgery and transplantation are performed here.