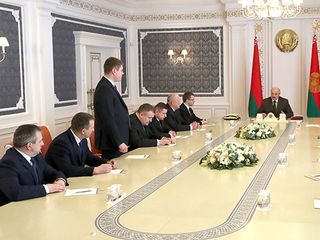 Today the President took several personnel decisions. A.Lukashenko appointed Sergey Kovalchuk minister of sports and tourism of Belarus. As the head of state noted, there are more problems in the sports area of Belarus, than achievements, so the main task now is to put it to rights. That is why, a military man has been appointed. Leonid Marinich, the former first deputy minister of agriculture and food will go to Uzbekistan as the Ambassador of our country. The President noted, that Uzbekistan is among the priority countries for Belarus. The bilateral relations have been rapidly developing recently. The head of state also approved several new heads of executive bodies. The accent for the local government is to center attention at the development of regional economies.