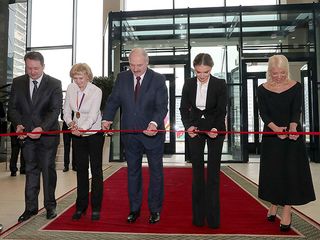 The Palace of gymnastics has been solemnly opened in Minsk. The ceremony was attended by President of Belarus, as well as head of the European union of gymnastics and famous athletes. The new facility is worth the money spent to its construction. President Lukashenko noted this after having scrutinized the functional capacities of the center. It allows simultaneous training of up to two hundred sportspeople. The modern palace will become one of the central venues of the II European games. Calisthenics is among the most developed and medal-winning sports in Belarus. The decision on building of the complex was taken by the President. Active construction works started one and a half years ago. At the opening ceremony, the first exhibition performance of the Belarusian beauties took place.