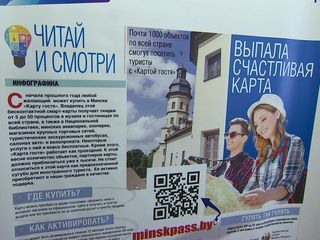 Guest Card image project went on a trip around Belarus. The day before it was presented in Mogilev. A representative office of the company opened there after the first one had been launched in the capital. Every tourist will now be able to purchase a pass to the world of discounts for tourist sights, museums, cafes, hotels, and public transport. The cards are valid from one day to one year. Two new cards were released ahead of the Second European Games.