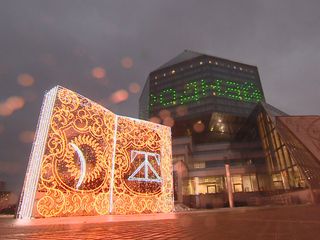 All day Minsk residents have been able to pass a test of knowledge of Belarusian vocabulary prepared by the National Library and timed to the Mother Language Day. On the digital facade of the building, quotations of classics of Belarusian literature were screened, as well as authentic Belarusian words, which reflect the specific character of the Belarusians. Today is International Mother Language Day. First announced by UNESCO General Conference it is celebrated for the 20th time. Every year, as part Mother Language Day celebrations, events are held worldwide aimed at fostering tolerance and respect for all languages.