Museum of Money opened in Minsk 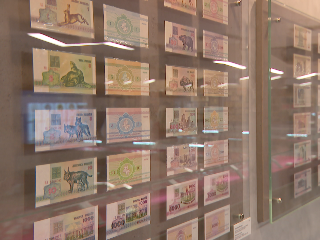 The Museum of Money was opened in the capital of Belarus. The exposition features copper, cast-iron, gold and silver coins, as well as the first money of the independent Belarus. There are over a thousand exhibits, including bills with inscriptions in six languages, palm-sized coins in the form of icons. The money is united by the fact that all of it has been active on the territory of Belarus for the last 120 years.