Meeting of CIS Information Council to be held in Minsk 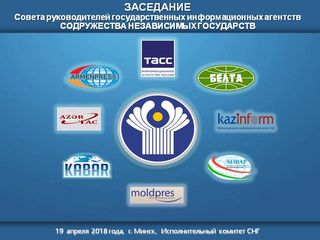 The heads of the largest news agencies of the CIS will gather in Minsk today. The executive committee of the Commonwealth will host a meeting of the Information Council. It is planned to discuss the main criteria in covering the cultural values and traditions of the peoples of the CIS countries. Before the beginning of the meeting, participants will get acquainted with the work of the largest information agency of our country – BELTA news agency. By the way, this year the Belarusian Telegraph Agency celebrates its 100th anniversary. The names and times have changed, but the agency always had one essence - efficiency and reliability. Belta's photo chronicle became a historical documentary chronicle of Belarus.