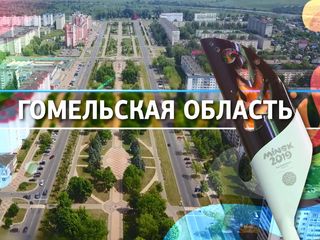 Few days remain until the completion of the large-scale Flame of Peace torch relay. Now the torchbearers are in the Gomel region. About 100 kilometers were covered yesterday. Today, according to the plan is the visit to the capital of the Belarusian metallurgists Zhlobin. There, the moment of the transfer of the relay will take place within the framework of a grand flash mob with the participation of cheerleaders and athletes. They are waiting for the fire at the metallurgical plant and in one of the most beautiful castles in Belarus – the Kozel-Poklevsky manor. In the Gomel region, the "Flame of Peace" will travel until June 10, pass through the flora and fauna treasury – the Pripyatsky National Park, the ancient city of Turov, Belarusian Switzerland – town of Mazyr. Then the Fire of the 2nd European Games will go to the Minsk region.