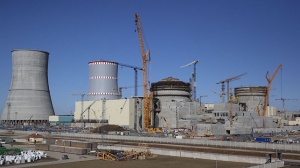 The Belarusian NPP will be ready to import nuclear fuel early next year. Now the construction of the first power generaing unit is at the final stage. Its physical launch is scheduled for the second half of April, then after two and a half months the energy launch will be held, and then approximately six months after, pilot generation will be launched. The first power generating unit is scheduled to be commissioned in December 2019.