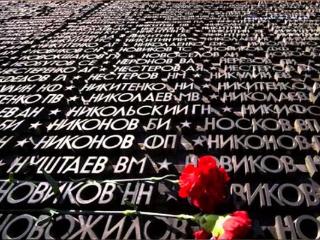 Today Belarus recalls the events that took place 76 years ago. On June 22, 1941, Germany attacked the Soviet Union and the Great Patriotic War began. The Brest Fortress was the first to face the enemy. Today, at dawn, those events were reenacted in the citadel. Thousands of Brest residents and tourists, including delegations from Russia, Ukraine and Slovakia, watched the re-enactment of the battle on the territory of the Kobrin fortification. This morning, in the center of Minsk at the monument on Victory Square, the border guards paid tribute to the memory of the soldiers who died on the battlefields. Today the silent drill platoon took over the watch at the Eternal Flame monument. The rallies dedicated to the Day of the People's Memory of the Victims of the Great Patriotic War were held today at dawn in all frontier units and detachments. The first memorable requiem took place in Polotsk on the Barrow of Immortality.