Ceremonial handing over of passports timed to Constitutional day throughout Belarus 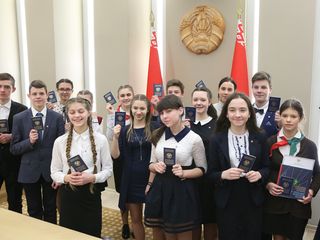 Issues of legislation, constitutional law and development of the economy will be covered in the chronicles of the young Belarusian state. The Chairman of the Council of the Republic told young Belarusians about the work on the new edition. Michael Masnikovich handed over the first passports to the guests. Today, the final events of the all-Belarusian action «We are citizens of Belarus!» are held. The best students and young athletes got their first passports from representatives of state governing bodies and Olympic medalists.