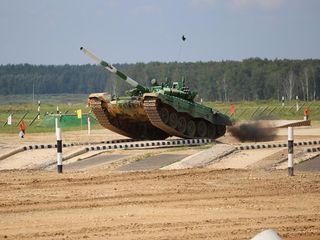 The Belarusian military are to take part in the second race of the Tank Biathlon at the Army Games.

Following the race, the finalists will proceed to the Relays. And the day before the Belarusian team won the first race. Our team covered the distance of over four kilometers in 22 minutes, two minutes ahead of the nearest pursuer. The Belarusians exhibited perfect shooting skills hitting all five targets, dummy tanks and a helicopter. The International Army Games will end on August, 11th. Tey take place at 24 shooting ranges across 7 countries.