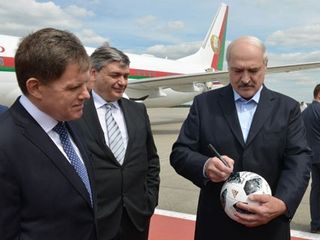 Belarus President Alexander Lukashenko has arrived in Moscow where he will attend, on the invitation of Russian President Vladimir Putin, the 2018 FIFA World Cup opening ceremony and first match. In the airport, the Belarusian head of state was welcomed by Zabivaka the Wolf, the official mascot of the current championship. Alexander Lukashenko played some football with Zabivaka and signed a football wishing “good luck to the Russian brothers”. The 2018 FIFA World Cup kicks off in Moscow today. The opening match Russia vs. Saudi Arabia will be hosted by the recently reconstructed stadium Luzhniki. The championship will feature such football stars as Ronaldo, Messi, and Neymar.