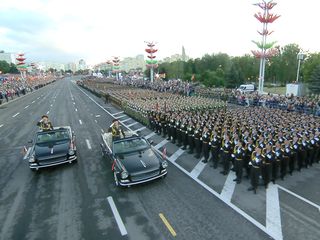 Belarus celebrated Independence Day, the key holiday of Belarusian statehood. In the evening a traditional military parade took place in Minsk. The aerial units were followed by 25 parade units on foot, including those representing the armies of China and Russia, banner groups from Azerbaijan, Armenia, Kazakhstan, Kyrgyzstan, Tajikistan, and Uzbekistan. The parade of Minsk garrison units ended with a military drill performance of the guard of honor company of the Minsk military commandant office. A total of over 5,000 military personnel took part in the parade. The mechanized column also featured over 280 wheeled and tracked vehicles and about 50 aircraft and helicopters.