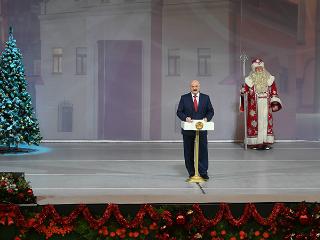 I hope that the young generation will build on the achievements of modern Belarus, President Alexander Lukashenko said during a New Year charity event held in the Palace of the Republic as part of the Our Children charity campaign. The event has brought together over 2,000 children from all regions of Belarus. After the New Year show the children received presents from the Belarusian president. In response, the young guests prepared hand made souvenirs. On behalf of all the children, Alexander Lukashenko was presented with a panel picture and an art object in the form of a New Year tree and a Dog that symbolizes the coming year.