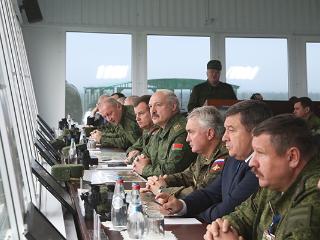 The goals of the Zapad (West) - 2017 military exercise were achieved. This was stated by the President of Belarus, Commander-in-Chief of the Armed Forces. A.Lukashenko watched the maneuvers from the observation platform of the Borisovsky shooting range. The Head of state attended the supplementary control center of the regional Belarus-Russia army grouping, as well as the 1-st tank army of the Western military district of the Armed Forces of Russia. The leaders of the Belarus-Russia Union state, the Commonwealth of Independent States, Collective Security Treaty organization, foreign observers and diplomats were present at the shooting range, where repelling of the imaginary adversary' offensive was trained. When addressing the manpower, the President named the drill Zapad-2017 the most spectacular and high-scale event of the armed forces of Belarus and Russia.