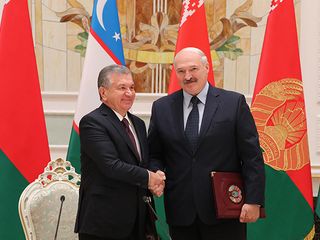 The priority areas of the Belarusian-Uzbek cooperation should be the deepening of industrial cooperation and the creation of joint ventures. This was stated by Belarus President Alexander Lukashenko after talks with the leader of Uzbekistan. According to the head of state, countries have good prospects for increasing cooperation in engineering, agriculture, pharmaceuticals, transport, and IT. Minsk proposes to create an industrial complex in Uzbekistan. According to Alexander Lukashenko, the issue of the effective implementation of the Belarusian-Uzbek projects is paramount, because not all of the proposals discussed earlier have been implemented.