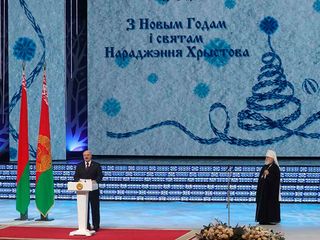 Traditionally, at Christmas Belarus President bestowed For Spiritual Revival prizes, as well as special prizes upon workers of culture and athletes. According to Alexander Lukashenko, the key treasure of the Belarusian state is the people, who augment the country’s glory with their talents, creativity, and hard work. Among the laureates there are those who do nothing short of setting the Thames on fire, like workers of the Belarusian children’s hospice and employees of the care home for children with special needs in the village of Vesnovo. Yulia Bykova and Yevgeny Oleinik were awarded for implementing the theme of native land in their pop music and songs. Special prizes were bestowed upon workers of culture and sportsmen. The ceremony was followed by a gala concert.

Inviolability of Belarusian-Russian cooperation confirmed
Back to the list