Belarus and Turkey plan to increase trade to $1.5 billion 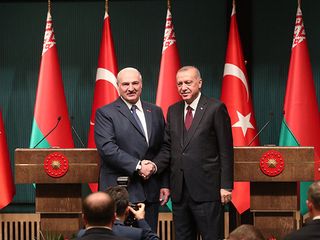 Belarus and Turkey plan to increase trade turnover to one and a half billion dollars. Presidents Alexander Lukashenko and Recep Tayyip Erdogan set such a goal the day before during their meeting in Ankara. Both political and economic cooperation were on the agenda: agreements and documents have been signed to further improve conditions for the development of Belarusian-Turkish relations in various areas. Alexander Lukashenko noted that the current level of partnership allows countries to set the most ambitious goals. Also, Ankara hosted a meeting of business circles from both countries. The total amount of agreements reached is estimated at $325 million.

Inviolability of Belarusian-Russian cooperation confirmed
Back to the list