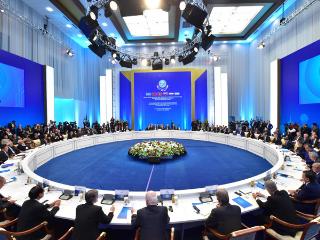 Security and economic dimension. Alexander Lukashenko focused on Belarus’ priorities in the Shanghai Cooperation Organization (SCO) as he spoke at the summit in Astana. The SCO was founded 15 years ago. The current forum is considered historic since India and Pakistan has joined the Organization. It is the second time Belarus is taking part in the SCO summit as an observer. Alexander Lukashenko confirmed readiness to strengthen the role of Belarus as a connecting link between Europe and Asia.

On the sidelines of the summit Belarus President held talks with leaders of Russia, China, Afghanistan, and Tajikistan. Alexander Lukashenko also met with UN Secretary General and Prime Ministers of India and Pakistan.