Results of meeting of foreign ministers of CEI countries 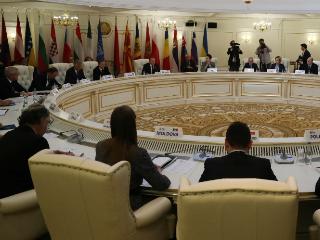 Compatibility across the Greater Europe and joint efforts in combating new challenges, including migration, were discussed the day before in Minsk by the Foreign Ministers of the countries of the Central European Initiative. This year, Belarus chairs the organization, which includes 18 countries. The key initiative of our state is to promote compatibility and complementarity across the Greater Europe. Following the meeting of the foreign ministers of the CEI countries, the priorities for cooperation for two years have been agreed upon, proposals on reforming the initiative in the light of new challenges and changes that have occurred in the region over the past decade have been approved. The candidature of Croatia for the post of the next chair of the organization has also been approved.