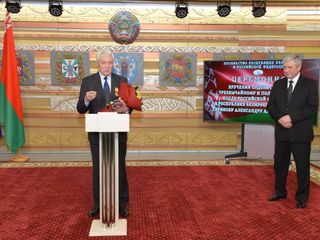 In Moscow, the former Russian ambassador to Belarus, Alexander Surikov, was awarded the Order of Honor. The Order was awarded on behalf of the President of Belarus for his personal contribution to the strengthening of Belarusian-Russian relations and the development of strategic partnership between the countries. Alexander Surikov was ambassador to Belarus for over 12 years. The theme of the Belarusian-Russian relations will be continued in the coming days. On February 13, a meeting between the Presidents of Belarus and Russia is scheduled in Sochi. The heads of state will discuss the activities of the Belarusian-Russian working group established to review integration processes, as well as emerging issues.