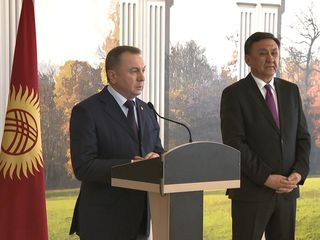 Belarusian Minister of Foreign Affairs Vladimir Makei met with outgoing Ambassador Extraordinary and Plenipotentiary of Kyrgyzstan to Belarus Kubanychbek Omuraliev. Vladimir Makei thanked the Kyrgyzstan ambassador for his vigorous efforts to strengthen bilateral cooperation. The parties discussed promising economic projects. Last year the mutual trade turnover exceeded $130 million. Today, there are 56 representative offices of Belarusian companies in Kyrgyzstan. The two countries are connected by a shared history. In Minsk, a monument was erected to the native of the Kyrgyz land, Hero of the Soviet Union, Dzhumash Asanaliev, a street and alley were named after him.