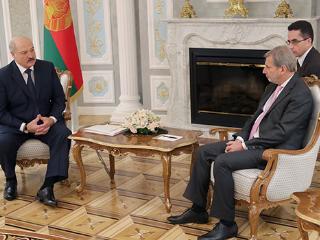 Belarus is ready to make any contribution to ensuring security of the European continent. This was stated by President Alexander Lukashenko at his meeting with the EU Commissioner for European Neighborhood Policy and Enlargement Negotiations Johannes Hahn. The head of state drew attention to the fact that recent years have seen an intensive dialogue between Minsk and Brussels. New directions and interests in bilateral cooperation have emerged. There was noticeable progress in mutual trade. The positive tendency is confirmed by frequent visits by the top officials from European institutions and the EU countries to Belarus. Negotiations with the European Union on Belarus' accession to the WTO entered an active phase.

The participants of the meeting also discussed the Eastern Partnership initiative. According to the President, it is necessary to address the challenges facing Europe and to promote the most relevant projects. In particular, in such areas as power engineering, transport and logistics.