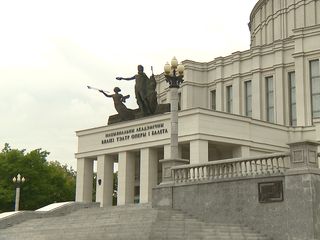 A premiere at the Bolshoi Theater. The Bat, an operetta by Strauss, opens today in Minsk. After half a century it comes back to the Belarusian theater in a new staging. The operetta is the work of an international team. The director is Gábor Miklós Kareni from Hungary. The scenography and costumes, of which there are more than two hundred, were created by Hungarian artists, too. Behind the conductor's stand is maestro from Italy Gianluca Marciano. Honored artist of Belarus, the man famous for his work as our country's central New Year character Ded Moroz, Vladimir Radzivilov, makes his debut on the big stage as Frosch the prison guard.