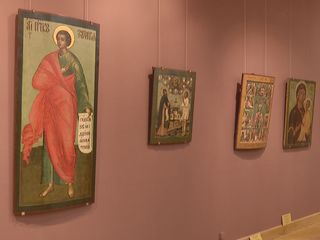 Moscow Museum of Russian Icons is presenting an exhibition of sacred works in Minsk, featuring 39 icons of the XVII century. The exposition is very interesting because in contrast to the XV-XVI centuries, by that time the Russian icon painting had borrowed some features of Western European art painting. On display are works of Russian northern schools, Yaroslavl and Kostroma, as well as works by icon painters of the Armory in the Moscow Kremlin. The exhibition is dedicated to the birthday of Metropolitan Philaret. Honorary Exarch of All Belarus celebrates his 84th birthday today.