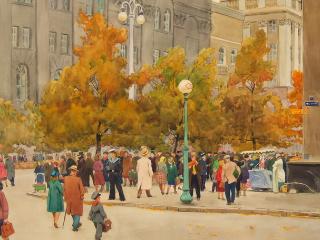 The image of Minsk through the centuries. A monumental retrospective dedicated to the capital city's anniversary was launched by the National Art Museum. The exhibition called "City. Architecture. We" presents a perspective on solemn and prosaic Minsk from artists belonging to different generations and traditions. Ahead of the City Day and as part of its traditional September Night action the National Art Museum will carry out a series of guided tours of Minsk that are based upon this exhibition.

Everyone will have the opportunity to first look at the metropolis depicted in the pictures that are a century and half a century old, and then walk through the modern capital and compare how much the city has changed over the last century.