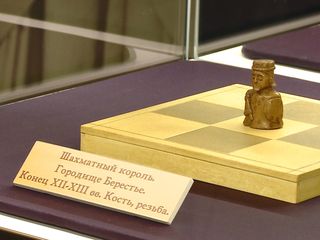 Residents and guests of Brest can see a unique exhibit – a bone figure of a chess king from the beginning of the 13th century. It was found during the excavation of the ancient settlement of Berestye. Especially for the millennium of the city, the museum of local lore has prepared the project «12 artifacts». Each month the most valuable items related to the city’s history and cultural heritage are exhibited from the funds. The chess king is the second artifact. On the territory of modern Belarus, 70 chess pieces were found during the excavations, but only 4 of them reflect real people and give an idea of the style of the medieval era.