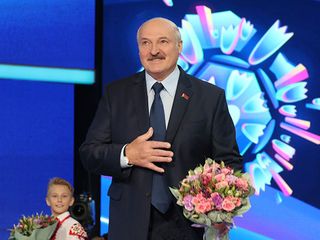 The 28th International Festival of Arts Slavianski Bazaar has opened in Vitebsk. The Slavianski Bazaar in Vitebsk festival has become a celebration of friendship and understanding, Belarus President Aleksandr Lukashenko said at the opening ceremony. The head of state noted that it was how the festival was conceived in the early 1990s. It was a response of the artistic community to the collapse of the great multi-ethnic country. "They teamed up to save the brotherly relations between the newly independent states. It is logical: in difficult times people always turn to art for moral support", the president stressed. Aleksandr Lukashenko wished participants successful festival performances, the jury fair judging, viewers the most positive emotions and good mood and everybody good weather.

Today the Slavianski Bazaar will see the Day of the Belarus-Russia Union State highlighting the 50th anniversary of the legendary Belarusian ensemble "Pesnyary". The festival will last until July 17.