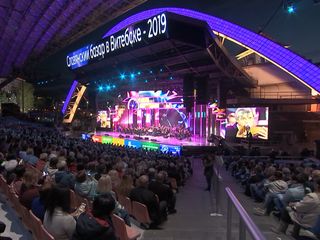 The final events of the 28th Slavonianski Bazaar will take place today in Vitebsk. According to the festival's tradition, the concert program at the Summer Amphitheater will complete with some rock music. Kipelov band will perform in Vitebsk. By the way, more than 10 concert programs took place on Slavianski Bazaar's main stage alone. The Vitebsk concert hall and the regional philharmonic society saw a number of were sold out events, too. For the first time this year some of the events were held at the Palace of Sports in Vitebsk.