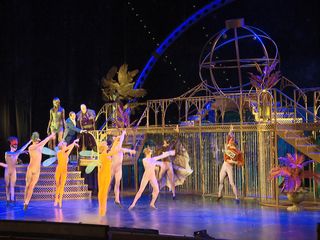 The night before the Bolshoi Theater of Belarus hosted the premiere of Johann Strauss's famous operetta. It took the international production team led by artistic director of the Budapest Operetta Miklos Gabor Kerenyi 6 weeks to rehearse with the theater's company. The lead parts are performed by the best soloists of the Belarusian opera. Behind the conductor's stand is maestro from Italy, Gianluca Marciano. An original libretto was written specifically for the Minsk premiere.